A new country; new culture – at least for me! I arrived in Kiev on Sunday 21st May and was met by Pastor George De Vuyst who, together with Rhiannon and Joseph, was hosting the Healing the Wounds of Ethnic Conflict training conference. George is an American missionary (Dutch Reformed background) who has lived in eastern Europe for 20 years and speaks Russian and Ukrainian. My reason for attending was really in response to a sense I had had for over a year that God wanted to take the message of healing out from Rwanda to other countries. I have seen the power of the cross workshop and the impact of the teachings many times in Rwanda over the years, but was initially unsure if it was right for me to actually try to train as a facilitator. Having met George and his wife Sarah before at meetings in North Wales, I knew that the HWEC course they had attended in Rwanda the previous year had transformed their lives and that they really wanted to see this ministry grow in Ukraine, a country that has experienced so much pain and suffering since the forced starvation of the ‘Holodomor’ in the 1930’s; the Soviet era and more recently the Maidan riots, Crimea and Eastern Ukraine conflicts.

Taking it all to the cross of Christ – personal woundedness, ethnic prejudice and pride.

What a week! In the rural, forested setting of a summer camp resort we learned from Rhiannon and Joseph about Father’s love for us and His longing to see us joined together in unity as part of God’s ‘chosen people’ and ‘holy nation’ [1 Pet 2:9]. We  examined our hearts, prayed together in small groups, and then divided into four groups. The Ukrainian speaking Ukrainians, the Russian speaking Ukranians, and the Russians all spent time discussing their attitudes and prejudices towards one another, while we westerners did the same. As we shared these with each other, the pain was evident as many have suffered personally and in their families.

During the cross workshop these issues were written down, nailed to the cross and carried outside to be collected and burned. Jesus was not only ‘pierced for our transgressions’, but he died to ‘bear our griefs and carry our sorrows’ [Isa 53:3,4]. As we stood in a circle, many felt that what was given to God in this way could not be taken back again. Then the Holy Spirit moved amongst us and once again woundedness was exchanged for healing, sorrow for joy, and thoughtful reflection turned to thankful celebration! A joyful celebration of the ‘Holy Nation’ followed, which took the form of a meal together where each ethnic group took time to bless the others; we were also asked to share something typical from our own culture if we felt able to! Joseph obliged on behalf of africans by dancing part iof the ‘ikinimba’! I was gripped with mild panic when the turn of the UK group came, but Rhiannon got us out of it by singing the first verse of ‘Here is love’ in Welsh!

HWEC – the training of new trainers! 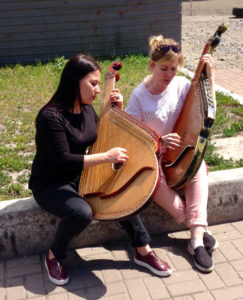 The 2nd week was focussed on training us to be able to run parts of the HWEC ourselves, and several of the Ukrainians had already done so in their areas, which had made a strong impact. Lots of them came from eastern Ukraine, which has seen much conflict. Anatoly spoke of the difficulties he had encountered travelling from Luhansk, which is actually within Russian occupied territory.

I had an opportunity to speak briefly about the impact of music to spread the message of forgiveness, healing and hope for the future in Rwanda. Many of them were excited by the potential of this in Ukraine, and we talked about it quite a bit during meal times. I actually wrote a song in a creative group session.

Oksana, one of our translators, worked on a translation and taught me how to sing the first verse in Russian. (I wrote the words down phonetically, since their alphabet confuses me totally!) I am definitely intrigued by the music culture, but admit to not knowing very much about it at present. After the course ended, George spoke to me about the possibilities of me returning in the autumn, to visit eastern Ukraine with him and explore the music side further as we try to reach new people with the message of forgiveness, so we will have to see. Please pray that God opens the door if this is right.

Earlier in the year, Jean won an Educators Award for her work in setting up St Martins, a post 19 unit within St Rose’s, Stroud. So that was a proud moment! Joel, Emily and Faith have now returned from a successful trip to Melbourne, where he worked at Envato head office for a while. Nathan is staying on in London for a further year and hoping to develop his freelance graphic design connections. The Abbey is entering a new season now that our vicar Neill Archer has left – I am now doing some regular worship leading there after a gap of around 5 years, so that has been fun!

We are One has a brand new website!! It looks absolutely amazing (well I think it does) – what do you think?