Hope you are all well. It’s March already and here we all are hoping that lockdown will soon lift for good, after such a difficult year last year. Jean and I have now been vaccinated – and Joel gets his today. Faith heads back to school on Monday – she’s pretty chuffed about that I hear! It’s been one whole year without any travel for me. So unusual. Meanwhile, ministry opportunities are beginning to surface, so I shall be keenly watching for any news on travel/vaccination passports!

Ethiopia – writing songs of hope and healing this year.

Joseph introduced me to a young Ethiopian musician, Desalegn, late last year and we’ve corresponded quite a lot since. He’s very keen for me to visit later this year and help them write new songs of hope and healing that can touch a nation torn apart by recent painful tribal warfare in the Tigray region. Desalegn told me that he’s been running reconciliation training programmes for the last 4 years and he has seen some success with groups of pastors, despite his young age. It is not without challenges and also danger, as this kind of thing can get you in trouble with the authorities, who are hyper-sensitive to anything they feel might have a ‘political’ message. But he is absolutely determined to do what he feels God has called him to do.

Here he is with friend Maraba, and two singers – one of them is quite well-known in Ethiopia. It seems all are very happy about the idea of us getting together! I have discussed this a bit with Joseph, as we both feel that the HHTN training is also key and needs to happen at the same time, to give the musicians a chance to engage with their own need for healing. Joseph and I are discussing a possible visit in June, to Addis Ababa. A lot depends on whether the plans can come together locally – and international travel restrictions lifted by then as well of course.

‘Espoir De Vie’ have been doing really well this past year. They all decided to take time off work during last October’s elections in Cote d’Ivoire, and focussed on a plan to set up lots of informal meetings in market places and other places where people gather. The idea was to try to encourage people – especially Christians – not to take sides in the run up to the election, but to come together in unity to pray for the nation and for healing. They spent time in prayer, worship and intercession and also released a video via social media that featured the song ‘Père, guéris ma nation’. I think I mentioned it in our last newsletter, but here is a link to it again: 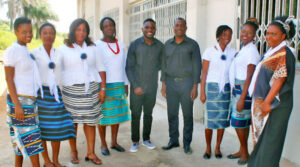 It’s great they are doing so well, but they are a small group and mostly attend one church in Abidjan, so Joseph and I were discussing a plan to see if we can help them grow a bit in size and also encourage other singers from different churches to join them. Late last year, I suggested they might consider writing some new songs and send them across for me to arrange here. We could then plan to get together to record the vocals at some point in the first half of this year – that would be a good time to invite others to join us. The group were keen and unanimously agreed on this plan, so I am now awaiting the outcome of their new song writing workshops! Meanwhile, their ‘parent’ organisation, AGIR-CI have been busy running new reconciliation workshops and Mamadou sent me these photos; one of EDV (Louange and Esther were visiting) and another of the cross workshop. 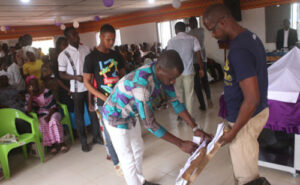 How to write good worship songs – via zoom!

Last year, a keen young songwriter contacted me via the website. I did a couple of studio arrangements for her but felt at the time that the songs themselves needed a bit more work, so I wasn’t sure whether to do any more. But Yvette was polite and persistent, and she emailed me several times asking for advice and input, giving me full permission to correct and change anything. Eventually I suggested a zoom meeting and she agreed. We’ve been meeting weekly for a while now, and she’s written 3 or 4 new songs in the meantime. I remember doing a whole lesson on how song lyrics need to scan properly – then found out that English is not her first language! She originally came from Hong Kong and speaks Cantonese. In fact, she has now written two songs in a kind of Cantonese folk style. One of the really nice aspects of getting to know Yvette has been to discover that she is actually a very new Christian believer. She told me that worship music and playing the piano have really helped her to express how she feels about being saved. One of her new songs is called ‘The Bitter Cup’. She explained that it was so amazing to her to know that Jesus drank the bitter cup of suffering so that we could taste the sweetness of salvation. It was refreshing to hear her talk about it so enthusiastically! Last time, we prayer together briefly at the end, which felt very natural despite the fact we’ve never met in person.

I hope it won’t be too long before we can once again meet to worship! I’ve had a longing that we might all experience the presence and grace of God through times of worship and adoration. So many are hurting deeply. I’d love to see some of us worship leaders and musicians working together to organize some sort of regular local event together where this can happen, in a ‘light touch’ kind of way without too much of a ‘meeting’ structure to it. Please join me in prayer about this – and let me know if you have any thoughts!

Last year was difficult and uncertain for so many. All our churches were closed for periods so meeting online became the only option. I did a little bit of worship leading via zoom for our local church, and also found a lot of personal inspiration from the music of Kari Jobe! I was able to organize a contemporary Carol Service in mid-December at the Abbey with a 5 piece band. It took time to organize and was nearly cancelled, but went ahead at the last minute – two separate concerts which we were able to live-stream and record on video. The response was hugely encouraging. I also did a zoom bible study for my Zim team of 2018. Some of them are still at uni and were really having a difficult experience in lots of ways, feeling isolated and without much personal support. It took me a while to prepare but I really loved doing it. I do feel we should be doing all we can to support our young people – the pandemic experience has felt quite suffocating at times for lots of us.