It has been nearly 6 months since I last wrote a newsletter, and the world has been changed utterly in the meantime by the Covid 19 pandemic. All of us have been affected in some way, and it just didn’t seem appropriate to put pen to paper so to speak, as our attention has been focussed elsewhere. Meanwhile quietly in the background, the ‘Africa Rise’ CDs have been taking shape in the past few months. Now our lives here in the UK are just beginning to move out of lockdown, I have been feeling that it would be good to get in touch with you all to let you know how the story has unfolded so far!

‘Africa Rise’  –  a musical journey and a shared vision 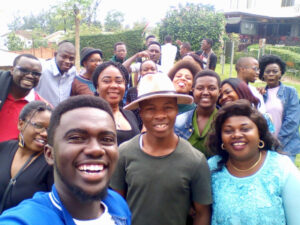 ‘Africa Rise’ has already been a few different things. First it was a WhatsApp group connecting creative young Africans from 8 nations together to write songs of healing, peace and new hope for the future in Christ. Then we all met for a week last November; the songs were finalized and the vocals recorded. Since then it has crystallized into 2 CD’s with 10 songs each; one in French and the other (mostly) in English. It’s been quite a journey! Hard to overstate how much impact has been made on all of us really.

Most of the young Africans who came have connections with Christian organisations in their own nations that have been working towards healing and forgiveness; WAPE (Fathers Heart) in Kenya, ARBI in DRC; AGIR/Espoir de Vie in Cote d’Ivoire; ‘Three in One’ ministries in Burundi. The week was a mix of teaching, worship and prayer, as well as song rehearsal and recording time. Rabagirana Ministries hosted us beautifully and all learned more from this ministry that has made a huge impact in Rwanda over the years.The atmosphere was positive and informal right from the start; it was plain that everyone loved being together and there was a great deal of excitement, joy and lively banter (in several languages) throughout! 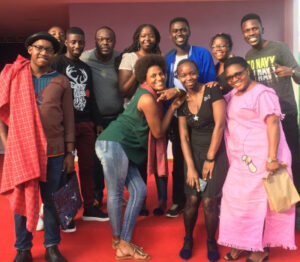 I finished upgrading my studio in late December, and began working on the Africa Rise tracks right at the beginning of January. So lockdown for me came early really; I always have to shut myself away
in my studio to some extent in order to really focus on making the tracks. This time, I had the unusual problem of transferring all the recorded vocals from Logic Pro 10 into my new setup and then building the song arrangements to fit each song mood from scratch. Making the tracks fit the singing; the opposite of what normally happens here. It’s been a challenge but also lots of fun. Along the way, I learned a lot about these talented young Africans. Some were new to the whole songwriting/recording experience, but many I have worked with before on albums in their respective nations, and they know the process well. They’ve been really creative this time and more than confident enough to explore a whole variety of styles to express themselves across a wide range of subjects. I’ve been finding there’s an intriguing variety of style, from jazz to rock and gospel with a dash of SA township thrown in! Later on, the actual forced lockdown made it impossible to get the last guitar and bass sessions finished, but by then I had 90% of what I needed.

At the time of writing, I’m just finishing the mixes and getting all the artwork copy together for the english CD cover. I think Sam (the other producer) in Rwanda is currently also finalizing his mixes on the French CD. I hope to be able to get this CD mastered and manufactured relatively soon, but it’s difficult to make any firm plans at the moment. Maybe I will be able to make a return trip to Rwanda later on in the autumn; who knows. As you might recall, Jaydon (Amos) from Zimbabwe and Pholoso and Caiphus from SA were able to join us last November. They all made good contributions; Jaydon wrote 2 of the songs and sang some lead vocals while Pholoso played some jazz piano and they both contributed a song. I think I can say they had no problems feeling right at home with everyone else! Meanwhile, Rabagirana Ministries have been putting together a very promising documentary about Africa Rise (hope to be able to provide the link to that soon), and they are also working on ideas to release the songs in the future, which will no doubt involve making videos to some of the songs.

I should maybe end by saying that thankfully we as a family are all well, although missing seeing each other like so many! Jean has been in school the whole time trying to work with latest government guidelines which has been very challenging at times! The Abbey, like most churches, has gone online so I’ve been making occasional worship song contributions to that process. Last week I lent my Zoom handheld portable recorder to one of our worship team singers; they were able to sing along to the tracks so that worked out ok.

I normally end with a ‘Diary Dates’ box but have decided to skip it this time as it will only be full of question marks. Do stay safe and take care!