Greetings, and thank you so much for your continued support. Many of the reconciliation music teams I worked with to make CDs some while ago had quite a few young singles in their mid-20’s. It’s only natural that they would eventually make plans to marry and move on with their lives. In Burundi, there were several who got married a few years back and one girl, Adora, actually emigrated to Australia with her new husband! I have lost touch with her now, but she wrote me a long and beautiful letter some while back, saying how wonderful the experience of singing and being a part of ‘Twarahawe Kumurika’ had been for her. 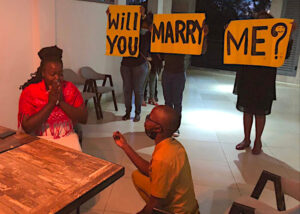 This year, there have so far been two engagements and one couple just got married on Nov 26! I have known Pholoso since he was 10 yrs old and in Kidzsing with Liz and Dave Pass in Joburg, SA. In 2008, he was part of the choir that toured the UK and went on to develop a lasting friendship with the Johnson family, who used to be part of our church here in Malmesbury. In 2019 he came to Rwanda as part of the ‘Africa Rise’ group and there in Kigali he met Kelcy, a Kenyan girl who sings with WAPE’s ‘Fathers Heart’ team.

Living in Kenya and SA, it was difficult for them to progress their relationship, especially during the pandemic. But eventually both were able to visit each others homes and meet with friends and relatives. Getting engaged proved a tall challenge; but Pholoso was able to persuade some of the FH team to help him plan a suitable occasion together with Kelcy. Some while back, I was sent this intriguing photo! A team effort it seems – happily Kelcy said ‘yes’! Both sides of the family had lots of adapting to do, as there are quite a few cultural differences between the two countries when it comes to planning a wedding! 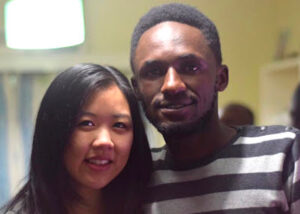 Baraka (music director of FH in Nakuru, Kenya) was also busy during the lockdown, getting to know Janielle who is a pastor’s daughter from Australia who had moved to Rwanda. Now they are engaged and plan to marry next year. He was keen for me to meet her, so we arranged a zoom call in September and spent around 90 minutes chatting about various things; how they met and future plans etc. I was impressed with this determined young lady who has a heart for mission and spent 3 years living in Kabul teaching piano at ANIM, the Afghanistan National Institute of Music. Sadly that place is now closed. She actually left the country well before the Taliban took over, but still stays in touch with a few of her students I understand. When I think of these two couples, the future seems bright. They are so committed to the Lord and to serving Him. Also, they are creative, fearless and with a deep understanding of the need for healing and reconciliation in their cultures. We wish them well and pray God’s blessing over them!

Zoom worship – reaching out across the world

Many of us learned how to stay connected over long distances via zoom, during the various lockdowns. I discovered early on that it was possible to lead worship from my studio, and though the experience is a little different to doing it live, many have told me how encouraging it is to connect in this way, especially those in front-line situations in Africa. This autumn, I have met both with Desalegn in Ethiopia and EDV in Cote d’Ivoire via zoom and we took some time to worship together, share news and pray. In every case it has proved very worthwhile and I am thankful to God for that! 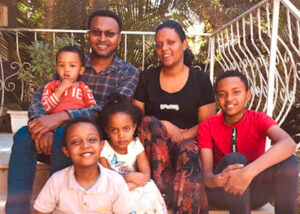 Actually Desalegn’s news was astonishing. Recently he did a whole series of HHTN reconciliation meetings in different locations and told me that, when they stood in the gap and asked forgiveness for tribal conflict, several of the meetings became chaotic because so many people were weeping and just broken apart with grief. God is evidently blessing his ministry abundantly, but he needs our support and prayers. Recently he organized a retreat for singers to pitch the need for a songwriting workshop. We hope to do this together next year; please pray we get a chance to do that despite the rising tensions in the country. We really need representation from all of the major tribal groups; most of those below are Oromo.

Jean is still very busy at school but is in the process of handing over some responsibilities. Joel and Emily are well; Faith is now a year 1 at school and Tess is in nursery. Nathan has moved to St Albans and is living with his partner Billie; she works as a childrens carer, mainly with autistic children. My studio work continues; this year I worked with Debra Fisher, a Christian singer, to produce her first CD of ‘gospel classics’. I am also continuing to zoom regularly with Yvette in Manchester, coaching her in worship songwriting – I have also done some tracks for her.

‘Sanctuary’ – a new freedom in worship

This autumn, several of us came together to start a new local area worship initiative called ‘Sanctuary’. It meets monthly at the Abbey. Many have told us how much they’ve enjoyed coming to this, it seems to have really met a need. Several of us also meet every other week to worship and pray – we have been exploring our freedom in the Spirit and reaching out to God to know better how we might minister God’s transforming Presence to those who are vulnerable and looking for answers, through worship. So far, it has been a very positive journey and many have sent their encouragements and have told us how much they look forward to our times of refreshing together. We’re taking a break during December but plan to re-start in January next year.

Thanks so much for all your amazing support and prayers! Do stay safe and take care.

The Crossroads Trust is a Registered Charitable Trust, set up in 1987 with the following aims: to assist in the encouragement of missionary activity designed to foster the spread of the Christian faith; to promote better education between and within diverse cultural settings, and to provide relief for the poor and needy in society. Since 2005, the Trust has focussed solely on supporting the reconciliation ministry of Dave Bankhead and ‘We are One!’ Trustees include; Mike Burn (Chairman) and Simon Shaw. Registered Charitable Trust No: XN74834